Standing Mixers from Kitchenaid have become kitchen icons over the last 100 years. They can be seen everywhere from baking competitions to sitcom kitchens. Many baking fanatics have been dreaming about owning their own for years.

When it comes to choosing the right Kitchenaid standing mixer things begin to get a little complicated. Kitchenaid has over 7 different types of standing mixer, and it’s hard to even know where to start.

This article is for those of you who are looking for a mixer to use at home for casual baking. If you want a mixer that you can use in a more professional capacity check out our reviews of the Professional 600 series.

For those of you who are looking to get stuck into some at-home baking then your two main choices are the Classic and the Artisan ranges.

Kitchenaid has been selling standing mixers for over 100 years now. The company launched in 1919 with one of America’s first automated egg beaters. They got their name from one of the developer’s wives who said ‘I don’t care what you call it, it’s the best kitchen aid I’ve ever had.’

The brand quickly grew in popularity, however, things really picked up for them after they partnered with designer Egmont Arens. Arens helped the brand create their iconic K5 design that went on to win dozens of awards and is still displayed in design museums all over the world.

Very little about the outward appearance of their standing mixers have changed since the K5 launched in 1936. In recent years, however, Kitchenaid has begun to expand its range. IT began with the launch of the Artisan range in 2007. This was quickly followed by Kitchenaid’s first professional range.

Later that decade Kitchenaid launched a full range of kitchen appliances including dishwashers, kettles, and toaster ovens. These are all available in some of Kitchenaid’s most iconic colorways.

Kitchenaid began as a company trying to reduce the workload of struggling housewives, having been heavily inspired by the story behind the first washing machine. Since then they have continued to support women all over the world.

This included releasing an exclusive pink shade of their products that have been raising more for Breast Cancer charities for years. They are currently running a campaign to help boost the number of women who work as professional chefs. They are supporting women being taken seriously in the workplace and not being written off, as they have been for years in the restaurant industry. 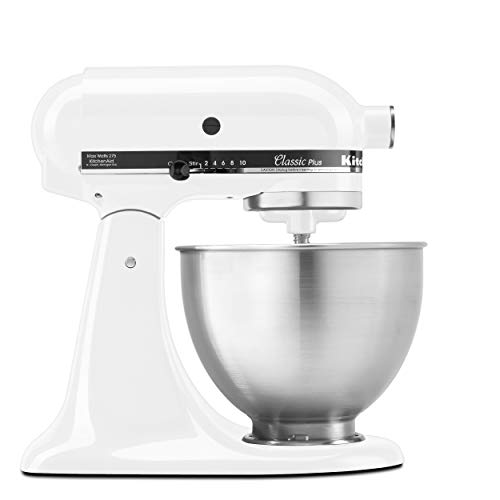 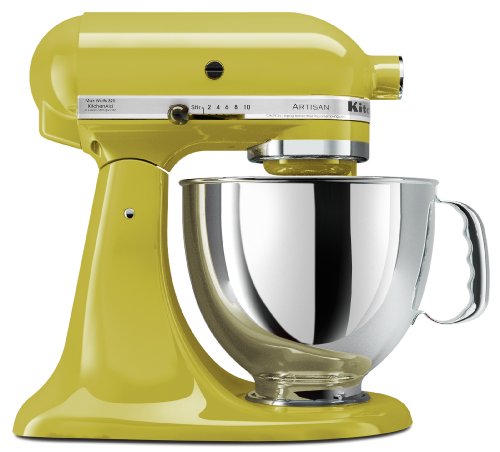 It is possible to get the Artisan with a glass bowl. The Artisan comes in more color options. In 2019, Kitchenaid released a mixer called The Queen of Hearts to celebrate its 100th anniversary. This mixer was a combination of the Artisan and the Classic.

The Classic – This mixer comes with three attachable accessories; a dough hook (designed to knead bread dough), a flat beater (designed to mix thicker liquids like cake batter), and 6 wire whisk (a durable whisk design). Most of the time buying these three accessories separately would cost more than buying the Classic

The Artisan – This mixer comes with four attachable accessories; a dough hook, a flat beater, a long edged flat beater (a flat beater with a silicone attachment that allows it to scrape the batter off the walls of the bowl), and a 6 wire whisk. The Artisan also comes with a second bowl. Unlike the original Artisan bowl, this secondary bowl does not have a handle.

With the Artisan you are given an extra bowl and a long edged flat beater on top of what comes with the Classic. The long-edged flat beater is in our opinion the highlight of these accessories. It really helps you make the most of your ingredients.

The Classic – The Classic is the least powerful machine that Kitchenaid offers. However, it is more powerful than most other count-top mixers on the market. The motor runs on 275 watts. The planetary mixing action (the beater and whisk move in opposite directions and pull the mixture into the center of the bowl) in this mixer runs at 59 points.

The Artisan – This machine is a medium-range product for Kitchenaid. Its motor runs at 325 watts. The planetary mixing action (the beater and whisk move in opposite directions and pull the mixture into the center of the bowl) in this mixer runs at 59 points.

The Artisan’s motor is more powerful than the Classic’s by 50 watts. Although the difference does not sound like much it is the difference between being able to make bread in your mixer and a sad, breadless life. The planetary mixing action runs at the same amount of points in both machines.

Note – The Mini Artisan runs at 250 watts, and its planetary mixing action runs at 69 points.

The Classic – This machine can hold up to 4.5L, and comes with a handleless bowl.

The Artisan – An Artisan mixer can hold up to 5Ls, it comes with two bowls, one has a handle and the other does not. The Artisan also comes with a splash guard.

The Artisan can hold an extra ½ liter. Its bowl has a handle, and it also comes with a splash guard – it is the only Kitchenaid product that comes with one of these.

Note – The Mini Artisan can hold 3.5L and its bowl comes with no handle or splash guard.

The Classic – Kitchenaid claims that the Classic is perfect for entry-level bakers, but bakers of all levels will enjoy using it.

The Artisan – This machine is described by Kitchenaid as being designed with more experienced bakers in mind. The Artisan was only launched in 2007 and was designed specifically to add elements to improve a baker’s experience.

The Artisan is a newer design, only being released in 2007. The Classic is heavily based on the machines that Kitchenaid was producing in the 1930s. They claim that the Classic is better for beginners, although we believe that there a few features on the Artisan that would suit beginners better.

For us, the clear winner is the Artisan, it wins in almost every area. It feels like Kitchenaid developed it in an attempt to dismiss the small number of complaints people had about the Classic.

You have more options when it comes to the Artisan. It comes in a wider variety of colorways and sizes. There is also the possibility one of getting with a glass bowl.

The Artisan comes with better accessories – as we said the long edged flat beater is one of the best tools that Kitchenaid offers. As you cannot use the Classic to make bread, we think that it should come with a long edge flat beater rather than a dough hook.

For many people, the ability to make bread in their standing mixer can be a make or break issue. The extra 50 watts that the Artisan has over the Classic make it the winner in this category too. If you’re not hugely bothered about being able to make bread then you’ll find the classic is a much cheaper option.

There isn’t a huge difference in capacity between the mixers, but the Artisan is bigger – again if you don’t mind a little less capacity you can save money by picking up the Classic.

The splash guard and handle on the bowl that is exclusive to the Artisan will be found very useful to many bakers who are beginning their journey. So we find it quite odd that Kitchenaid pushes the Classic as the choice for beginners.

The one area where the Classic has the Artisan beaten is the price point. You do get what you pay for with Kitchenaid, so when you pay more for the Artisan, you are actually getting more. However, if you are willing to sacrifice a few luxuries (like a handle on your bowl and being able to make bread) then you can save nearly half by purchasing the Classic.

However, our preferred machine is still the Artisan. For any other company, the Classic would be a stand out product, it’s just unlucky the Artisan exists now.