Have you ever wondered what grenadine actually tastes like? This popular syrup is often used in cocktails, but what does grenadine taste like?

Grenadine is the secret recipe to cocktail deliciousness. I remember the first time I tried Fanta Chapman, a Nigerian cocktail containing grenadine and booze.

I was far from the legal drinking age, but my sister let me have it since, in her words, it contained only a small amount of alcohol.

Now that I think about it, she silently bribed me with the drink so I wouldn’t say a word about her boyfriend (I think) we met up with.

Either way, I was on cloud nine. Well, not cloud 9 drunk, but cloud nine in awe of this tasty goodness called Nigerian Fanta Chapman. But I digress.

Grenadine is a star ingredient in many cocktails, especially in the mother of all cocktails– a Shirley Temple.

If anyone here has been to a bar before, chances are they’ve had grenadine on multiple occasions without knowing it.

Grenadine is an exquisite versatile syrup that can be found in cocktails, drinks, fruit juice, and even soda!

As great as this syrup sounds, it is sad that so many fakes of it are available. The good news is that this article will show what Grenadine is, what it tastes like, and what it can be used for.

First appearing in 1872, Grenadine is a non-alcoholic, pomegranate-based syrup obtained from the mixture of Pomegranates, water, lemon juice, and sugar.

Now, some people can decide to spice things up by adding some extra ingredients to their grenadine syrup. Ingredients like Pomegranate molasses and orange blossom water.

Aside from its use, an interesting thing about Grenadine is its origin. The name Grenadine” comes from the French word “grenade.” And no, not the bomb. Grenade in French means Pomegranate.

The French word “Grenade” is coined from another language! Latin. Specifically, the Latin word “Granatum” stands for seeded.

Real Grenadine has a deep burgundy color and adds astonishing flavor to drinks. This is why it is a very popular cocktail ingredient

Although Grenadine is a highly favored component of many cocktails, people think Grenadine is added just for color, taste, and even vibes. They believe it’s nothing more than sugar syrup.

But some people, especially bartenders, beg to differ. This is why most bartenders prefer to make their own grenadine and spice up their grenadine recipe.

The taste of Grenadine is a sweet yet tart and fruity one. If Grenadine has a predominantly sweet taste, cherry-like taste, or even a “cough syrupy” taste, it’s not real Grenadine.

Rather, it is an unsavory combination of high fructose corn syrup and food dye packaged as Grenadine syrup.

Most commercially made Grenadines are not made from Pomegranates. So their taste is never Pomegranate-like. Sometimes these commercial Grenadine syrups contain red coloring gotten from bugs.

What Is The Flavor of Grenadine?

It has a flavor reminiscent of the pomegranate juice it’s made from. This is why it has a sweet-tart and fruity flavor.

No, Grenadine doesn’t and shouldn’t taste like bubblegum. If there is a bubblegum-like taste in the Grenadine, it definitely isn’t made from the right ingredients.

Grenadine does have a sweet fruity taste but not like bubblegum.

Well, Grenadine isn’t particularly unhealthy. If a person is trying to reduce their sugar intake due to diabetes or any other health issue, adding Grenadine to their meal or drink is not a great idea.

Grenadine is made of sugar and used to sweeten cocktails, so obviously, it’s not a health drink or health tonic. However, it is not endangering or harmful to anyone consuming it.

What Are The Benefits Of Grenadine?

Now Grenadine may not have a lot of health benefits because it’s basically a sweetening syrup. But one of its major benefits is its versatility.

It can be used for a variety of cocktails. For every cocktail it’s made a part of, Grenadine always bestows extra flavor. Grenadine tastes great in alcoholic and non-alcoholic drinks.

Grenadine also gives extra flavor to meals as well. If you’re craving something different in your salad,  make it a little ‘fancy nancy’ by adding a bit of Grenadine.

Where To Find Grenadine 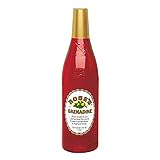 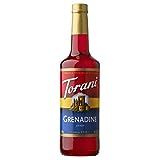 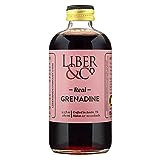 Is there anything in a bottle that doesn’t go bad? If there are, well, Grenadine isn’t one of them. Grenadine can go bad.

But if refrigerated, it will last for 6 months.

Grenadine contains a lot of sugar, which is its secret to long shelf life. Grenadine’s sugar content is the reason it can last a little past its expiration date. Albeit, it will lose some of its quality over time.

If you have a bottle of Grenadine in the fridge for quite some time, check the smell, taste, and consistency. If any of these seem off, it’s time to toss that bottle into the trash.

So to properly store your Grenadine, refrigerate or store it in a cabinet safe from sunlight and heat. Also, ensure the cabinet or pantry is at room temperature and the lid is tightly closed.

How To Use Grenadine

Raspberry syrup is a great alternative to grenadine. It has a similar sweetness and viscosity, making it ideal for creating cocktails and mocktails.

Raspberry syrup is also tart, which can be a plus or a minus depending on your preferences. 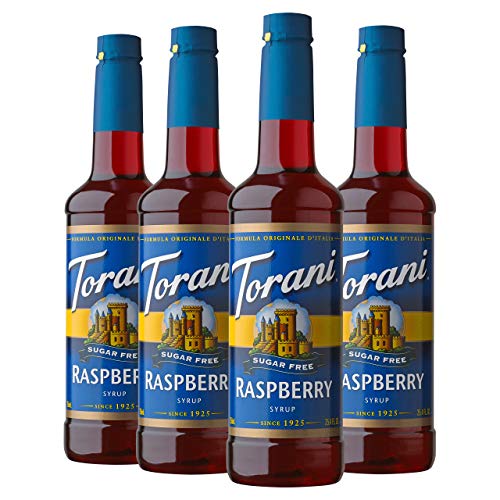 If you’re out of grenadine and need a substitute for your cocktail, cranberry juice is a good option.

Cranberry juice has a tart, slightly sweet flavor similar to grenadine. It also has a vibrant red color that will add visual appeal to your cocktails. 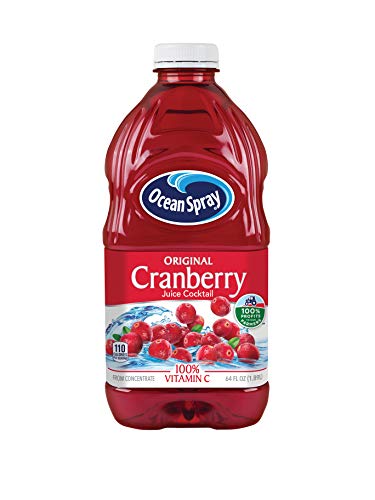 If you’re out of grenadine and looking for a suitable replacement, cocktail cherry juice is a good option.

This type of cherry juice is made from sweet cherries and has a deep red color that resembles grenadine.

Cocktail cherry juice is also very sweet, making it ideal for use in cocktails and other drinks. While it won’t provide the same flavor as grenadine, it will still add a touch of sweetness to your drink. 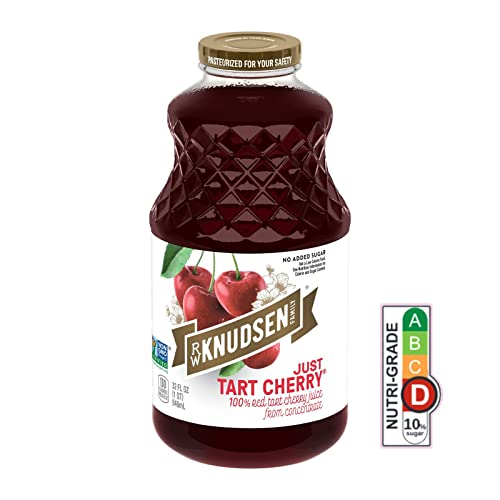 Pomegranate molasses is a thick, syrup-like condiment made from boiled pomegranate juice and sugar. It has a deep, rich flavor that is both sweet and tart.

Pomegranate molasses is an incredibly versatile ingredient that can be used in both sweet and savory dishes.

Additionally, pomegranate molasses can be used as a natural sweetener in baking recipes or even mixed into cocktails for a unique twist.

So if you’re looking for a Grenadine substitute, pomegranate molasses is a perfect choice. 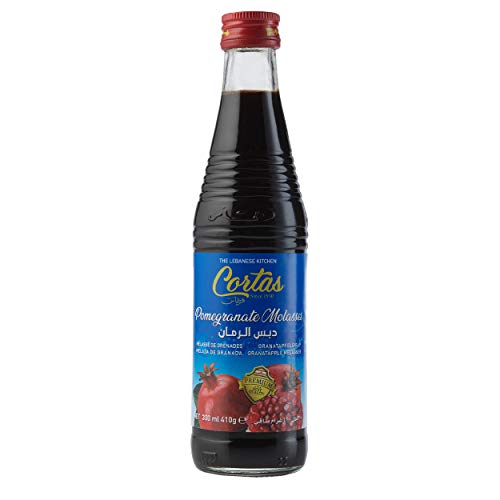 While crème de cassis is not an exact substitute for grenadine, it can be used in many ways.

When substituting crème de cassis for grenadine, it is important to start with less syrup and add more to the taste. 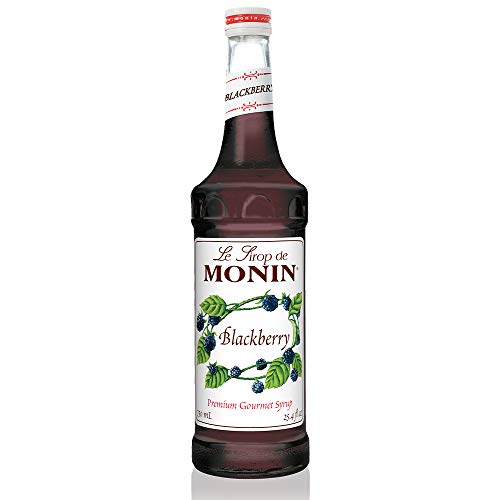 How To Store Grenadine

Storing Grenadine is pretty easy. If the bottle has never been opened, store it in the pantry. Ensure the pantry is dry, safe from sunlight, and at room temperature. Unopened Grenadine can last for an entire year and even a bit more.

Please remember that original grenadine– made from actual pomegranates, will not last as long as commercially produced Grenadine.

It is only natural that commercial Grenadine lasts longer than actual Grenadine made from Pomegranates.

An opened bottle of Grenadine is best stored in the refrigerator. This way, it would last for about six months. It can also be stored in the pantry but will only last for one or two months.

So, the bottom line is that the best way to store grenadine is either in the fridge or the pantry.

Everyone can choose what’s best for them, but if they’ve had the Grenadine for a while, please taste it to confirm its quality first.

Does Grenadine Need To Be Refrigerated?

Well, it’s more of a want than a need. If you want to refrigerate your Grenadine, feel free to do so. Refrigerated Grenadine lasts longer than pantry-stored Grenadine, so the choice is up to them. 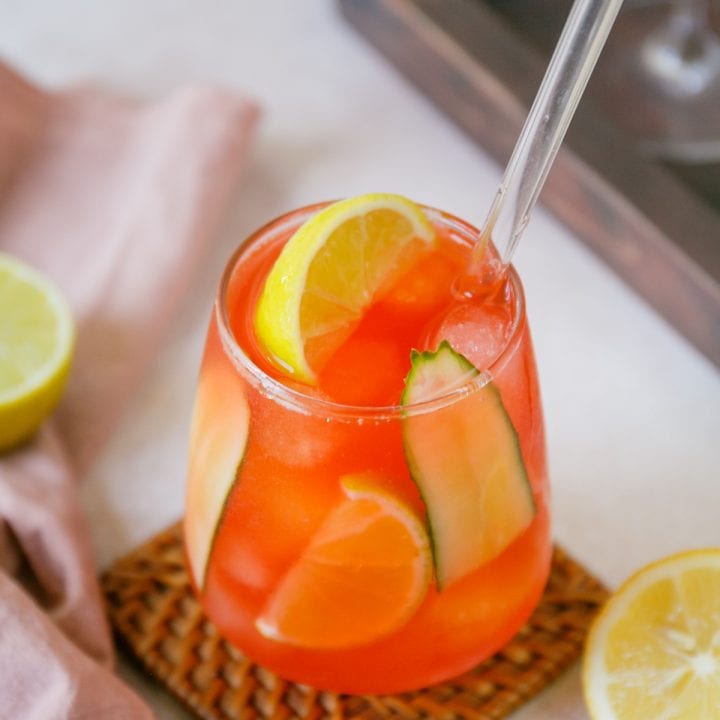 A Nigerian party is never complete without a cool and bubbly drink. Nigerian Chapman cocktail is a carnival of fruits coming together in a soda-syrup mixture with dazzling rose-red color. Quite frankly, it is the African Sangria. 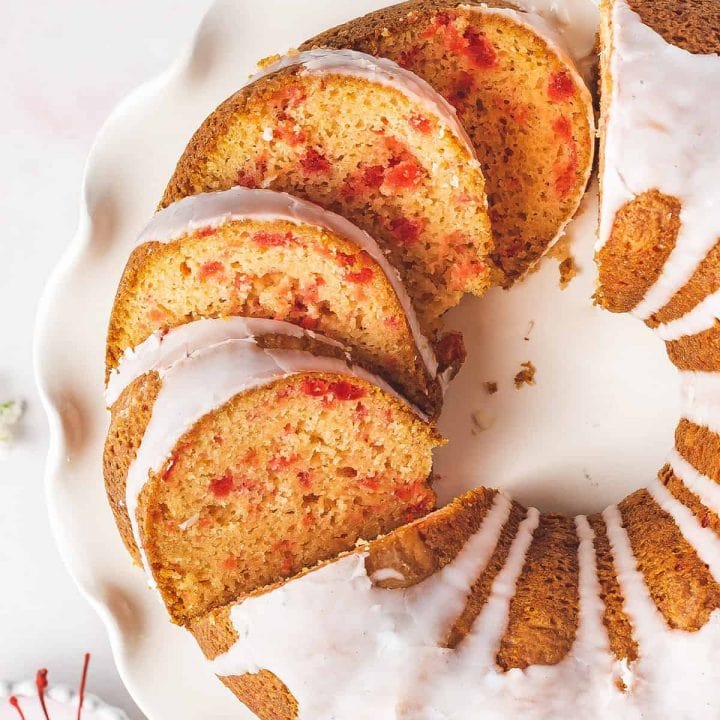 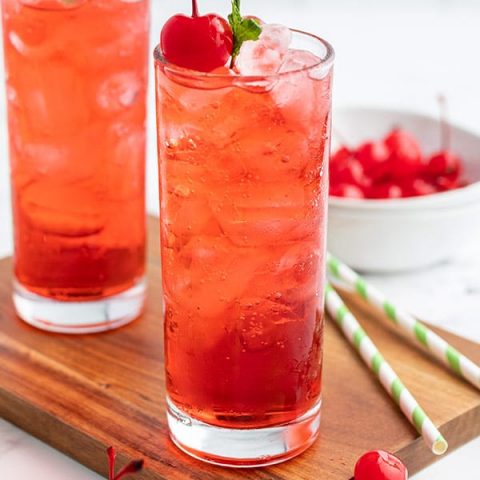 Only a couple of ingredients, a few minutes, and a big grin on your face when you drink a Shirley Temple is all that’s required! This fizzy non-alcoholic childhood favorite never goes out of style. 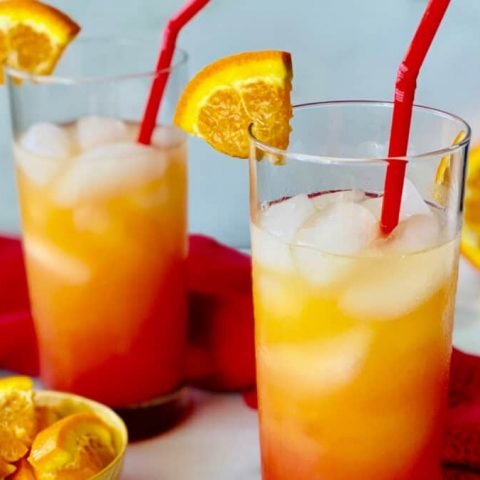 Gorgeous layers make this cocktail Irresistible. Enjoy a sweet Vodka Sunrise for a taste of summer.

A refreshing and fruity twist on the classic vodka sour, this pretty pink cocktail is quick to make with a few ingredients! The cherry flavor and hint of grenadine will keep you coming back for more. 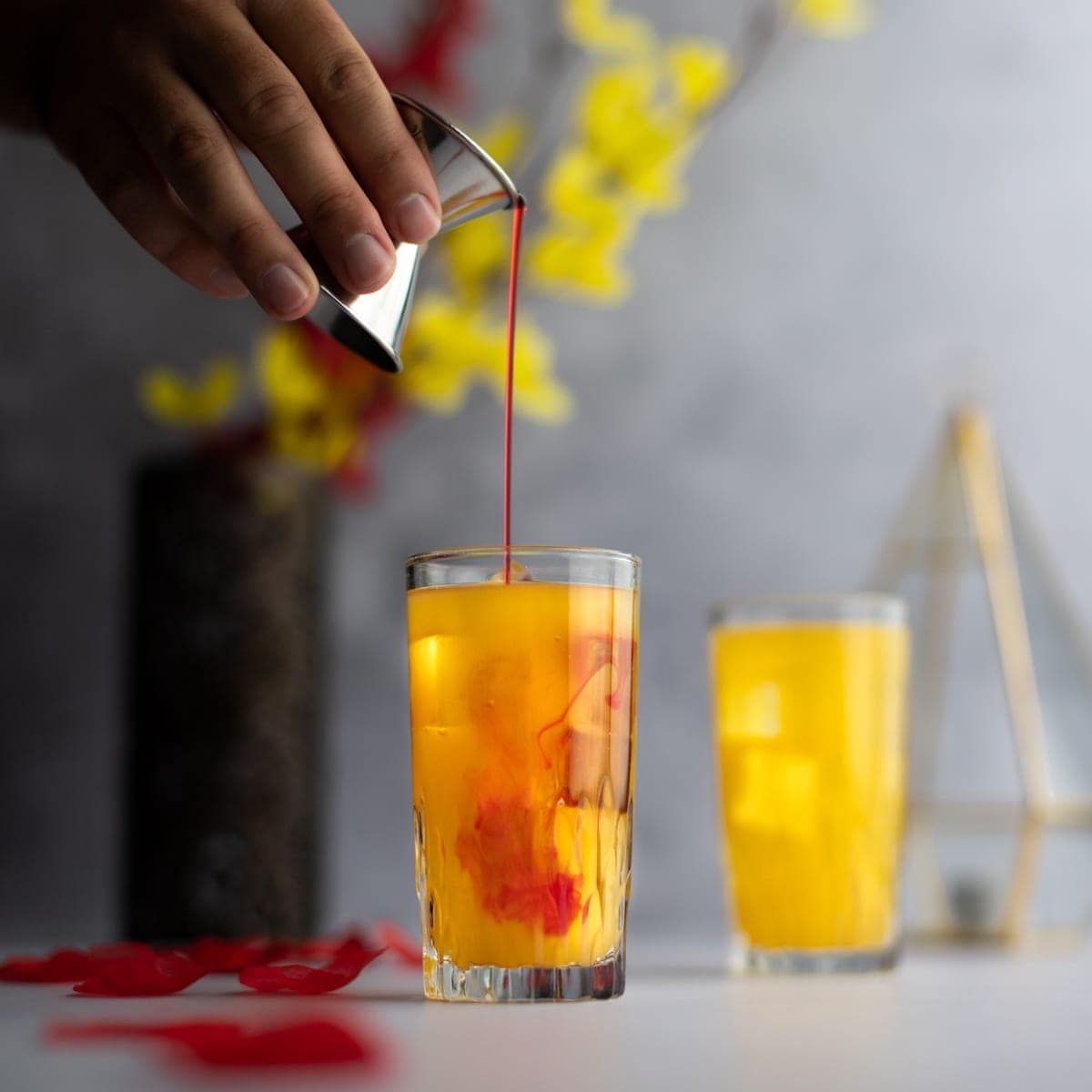 This amaretto sunrise cocktail is a beautiful, classy drink that is easy to make in less than 5 minutes. Sweet amaretto liqueur is mixed with peach nectar and peach schnapps, followed by a drop of grenadine to mimic the look of a sunrise.

Grenadine syrup may taste like a concentrated cherry flavor to the untrained palate. However, this simple syrup is actually quite versatile and can be used to add a touch of sweetness to a variety of dishes.

Grenadine has a sweet yet tart and fruity taste that is reminiscent of Pomegranates. This is why this delicious syrup is used as a sweetener in cocktails, food, and drinks.

If the Grenadine doesn’t taste like this, then it isn’t real Grenadine. Everyone should try to make their Grenadine, so they can fully experience the exotic taste of real Grenadine.

Then they can slather it over their food, salad, and drinks and have a delightful time.