Today I am going to be reviewing the Ozark Trail 5 quart Dutch Oven, one of the more budget-friendly options in the Dutch oven range.

For those that don’t know; the Dutch oven is a handy kitchen tool that can make cooking easy. Simply add all of your recipes into one pot and let it do all the work for you.

They are typically large iron pots that can go from the stovetop to the oven with no issues. They are one of the best appliances for keeping the heat in and are a popular campsite cooking tool as they can go directly over a fire.

Dutch ovens work well with fattier cuts of meat which can be tricky to cook in more conventional ways of preparing meat.

I was excited to see how this brand fared and looked forward to cooking up a meal. In this review, we’ll take a look at the ordering process, assess the build, and see whether this would be a good companion for trips, or even just for cooking some mean meals in the backyard. 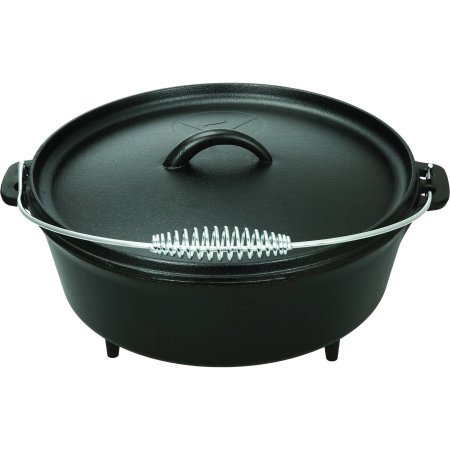 The first step was ordering the Dutch Oven. I purchased this one on Amazon and it arrived within two working days. It came packaged very well and was delivered in a sturdy box. 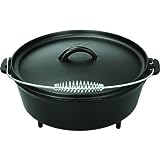 Overall I was happy with the build of the Dutch oven. It was quite heavy and wasn’t prone to moving around much. The lid was sturdy when placed on top, however, I did notice that it moved around slightly and it was a little loose.

However, this wasn’t a big issue and there were no problems with it falling off or removing too much heat during the cooking phase.

The Dutch oven is also kitted out with a handle that allows you to take a hold of it without burning yourself. There’s not much to say about the handle, except it did the job fantastically, even though it felt a little cheap.

But that’s to be expected for the price tag of this particular brand.

Inside there is plenty of room for ingredients and this could easily hold a large whole chicken. The iron casting felt quite rough on the inside, and so this would be better suited for fattier foods, such as fattier cuts of meat so that it is less likely to stick.

If you want to maximize your options when cooking with rough iron-cast material, check out the frequently asked questions section at the bottom as I’ll be seasoning this before use.

On the underside of the Dutch oven were some small legs that raised the moan pot. These would be ideal for cooking using charcoal or for leaving over an open campfire.

One thing to note about the legs is that they were quite thin, but this didn’t leave any issues with stability. In fact, the legs could probably fit through a grate, which would be ideal for barbecuing.

For the cooking and taste test, I used some pork chops and a few potatoes as a simple recipe that mostly anyone can try at home. This was enough to fill up the Dutch oven and give me a chance to try it out.

After placing it onto the grill, I added some wood chips to the coals and lit them up. After about 10 minutes, I checked the temperature of the coals and found that they were ready to cook.

Once the coals were hot, I removed the Dutch oven from the grill and let it sit for a minute while I prepared the food.

It tasted great, and suffice to say my taste buds were impressed! The pork chops were tender and juicy and the potatoes were perfectly done.

Overall I was happy with my purchase and can recommend the Ozark Trail Dutch Oven.

This is a great option for those that aren’t sure whether they would want to use a Dutch oven for use over a long period, and this budget-friendly option is a great place to start before you go ahead and make a big purchase for some of the higher-priced brands.

The one downside is that you’ll need to go through the process of seasoning this brand before use, otherwise you run the risk of your food sticking.

The higher-priced options are not going to have this issue, so this is one of the compromises you have to make when purchasing a budget-friendly Dutch oven. Get ready to stock up on those oven recipes and have a blast!

Should You Season A Dutch Oven?

Yes, this is recommended. Seasoning a Dutch oven will protect the cast-iron metal, prevent it from rusting and also help to create a non-stick surface for your ingredients. This is best done when you initially buy a new Dutch oven, before your first use.

How Do You Season A Dutch Oven?

A simple way to season your newly purchased Dutch oven is to use vegetable oil and a paper towel and rub the oil into the outer portion of the lid as well as underneath.

Complete the same process for the inside of the oven, making sure to rub the oil against the sides, and anywhere there is cast iron, which includes the bottom where the feet are located.

After the Dutch oven has been fully coated, place it in the oven at a temperature of around 300 degrees Fahrenheit, and leave it for about an hour. After it has cooled down it is ready to be used for cooking.

Does Food Taste Better If It’s Been Cooked In A Dutch Oven?

It all depends on personal preference, however, a Dutch oven is great for cooking low and slow for tougher cuts of meat, which typically have more flavor than leaner cuts of meat.