What are papadums? Papadums are very thin, round flatbreads that are traditionally made and consumed in India.

They are popular across the world as accompaniments to Indian food, but we rarely stop to consider how these subcontinental snacks came to our distant shores.

What Are Papadums? A Dish With Many Names

India is a hugely diverse country. There are over 100 major languages spoken in India and over 1000 different dialects.

It is no surprise then that papadums have different names depending on the geographical location and the language spoken.

All these words come from the same Sanskrit word parpaṭa meaning flat disk.

What is a papadum?

As the name suggests, papadums are flat disks of bread. Unlike other breads, these are crispy due to being dried and baked. In fact, they are more like crackers than bread.

Papadums are usually served as an accompaniment to the main dish and are perfect for scooping up rice and curry because of their hard, crispy structure.

Sometimes papadums are served as an appetizer with various toppings such as chutneys, diced onions, and pickles. More often than not this way of eating papadums happens in the western hemisphere in Indian restaurants.

Papadums vary from region to region just like their names. What unites all these regional papadums is the way they are cooked.

All papadums have a flour base. This flour is usually derived from legumes rather than grains.

A legume is a plant in the Fabaceae family and is often referred to as a pulse. Common examples of legumes are peanuts, lentils, and split peas.

Papadums are most commonly made with flour from black gram though chickpea, lentil, rice, and potato flour can also be used.  The type of flour really depends on what is available and common in a particular region.

To the flour, salt, spices, and water are added to make the dough. 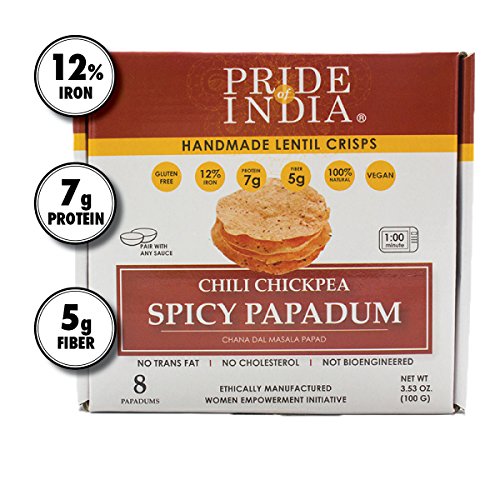 How are papadums made?

The method for making these delicious flatbreads is fairly simple. The key part is the drying process.

To begin with, you need to make the dough. There are two ways to do this and which you use will depend on the type of flour you are using.

If you are using legume flour, like black gram or chickpea flour, you will knead your dough together in a bowl.

If you are using a potato, rice, or tapioca flour then you will cook the rice with water like a roux.  This kind of papadum is often called rice papads.

Below you’ll find an example of the method for each of the two types of flour. 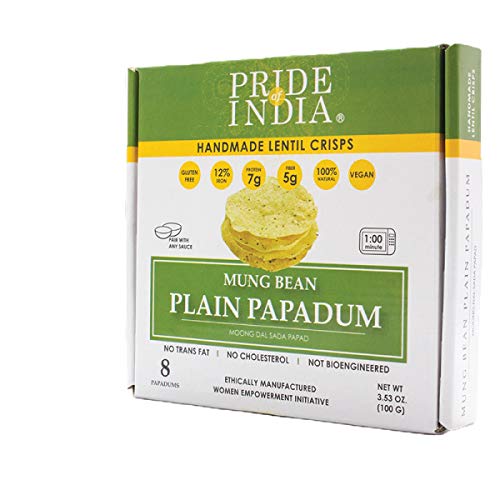 There are three different ways to cook your papadums and which you choose will depend on what equipment you have to hand.

This is the quickest way to cook papadums as it literally takes a few seconds.

If you have a deep fryer, then heat some oil as per the operating instructions. If you are using a skillet, you’re going to need about an inch of oil.

The oil needs to get really hot, around 356°f/180°c before you start cooking otherwise you’ll end up with soggy papadums.

Test the oil with some scraps of dough. They should sizzle, sink, and then rise when dropped in.

Once the oil is hot enough, drop your papadums in. You will see bubbles forming on their surface as they sink to the bottom. Within a few seconds, they will begin to rise again.

Use a spoon or tongs to scoop them out and put them on paper towels to dry off. They should be nice and crisp.

If you are using a frying pan with oil, you might need to flip the papadums over halfway through.

A more traditional but tricky method is to cook them over an open flame. This can be the flame of your gas burner or an open fire.

This takes slightly longer because the heat is not as high as when frying in oil. Also, the heat from the flame softens the dough before evaporating the moisture so it can get messy.

Hold the papadum in a set of tongs or skewer it with a knife and hold it above the flame. You might find that it begins to curl before it crisps. In this case, you’ll need to adjust your grip on the papadum.

Remove from the heat once the papadum is crisp all over. Some slight charring is good as it adds flavor but be careful not to burn them.

This is a fast and easy way to cook your papadums. Just chuck them in the microwave covered with some kitchen towel for about a minute.

They will crisp up super quickly because microwaves are designed to move water molecules out of food.

So there you have it, multiple ways to cook a multi-named dish! Let us know how you prefer to cook them!

What are papadums? I bet you now know what these are. For more food-related questions, visit our index of food FAQs. Here are a few suggestions for you:

Previous Post: « How Many Ounces Are in a Pint of Sour Cream
Next Post: Best Nacho Cheese Fountains »